Frasso is a site in the Agro Pontino. A thin tephra layer embedded in peat has been found at 1.10m depth, . Samples for pollen analysis have been taken in June 2016 and will be processed soon. Samples for macrofossil analysis will be taken in February 2017.

Two sites in the Agro Pontino, Ricci and Mezzaluna 3, have been investigated for pollen, botanical macroremains and molluscs results have been published in Bakels et al. 2015.

At Femmina Morta a peat sequence was present in which two sandy layers, identified as tephra layers, were present (see figure). The upper tephra most likely is the Avellino tephra, but the discovery of multiple ash layers in this area is new and definite identification has yet to take place (van Gorp and Sevink in prep.). In October 2015 cores were taken for pollen analysis. In February 2016 a trench was dug with the aim of taking samples for macrobotanical research.
The analysis of the Femmina Morta samples is ongoing, the first results will be published in the proceedings of the Scientific expert meeting that was held in June 2016.

At this location, the first 80cm contained modern brought up building sand, which was underlain by oxidized peat, containing a coarse layer at ~1.17 m depth which probably is the Avellino ash (biotites). Below, intact peat was found until up to 1.95 depth. Pollen analysis of the core has started. 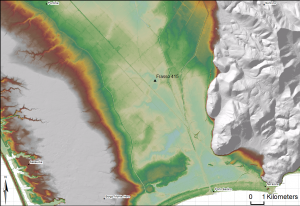 Agro Pontino Frasso Frasso is a site in the Agro Pontino. A thin tephra layer embedded in peat has been found at ...
Read More 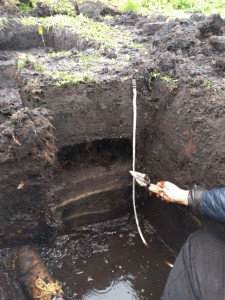 The macrobotanical research involves the analysis of larger botanical remains, such as seeds, fruits, leaves, roots and wood. Macrofossils are ...
Read More

Ideally pollen diagrams are derived from samples taken from peat or lake sediments. The formation of peat and lake sediments ...
Read More

Pollen and macrofossil data will be used to reconstruct the vegetation in the coastal wetlands of south Lazio before and ...
Read More